It means staying up until 4:30 a.m., but Steve Rock is cheering for the Calgary Flames from Ukraine.

Rock, 34, was travelling in Europe when Russia invaded Ukraine. He wanted to find a way to be useful, so after several difficult conversations with family and friends, he decided to become a volunteer with organizations working in the war-torn country, including Calgary-founded Helping Ukraine Grassroots Support (HUGS), which provides aid to the country.

Rock now distributes essential food and medical supplies in Lviv, Bakhmut and Kyiv — all while wearing a red-and-black Flames jersey. Originally from Ottawa, he says his support for Calgary’s hockey team is “complicated.”

“We all know that the Senators aren’t in it this year, and there’s no way I’m cheering for the Leafs,” he said.

“The Battle of Alberta is a huge thing. It’s a big thing for the people of Alberta,” he said, adding that if he’s going to be staying up late listening to hockey games, he wants to be wearing the team’s colours.

Calgary takes on the Edmonton Oilers in Game 2 of the playoff series on Friday.

While nothing about watching the playoffs is normal for Rock — he wears ceramic plates for protection under his jersey, and he frequently wakes up to the sound of shelling and attacks around him — he says tuning in to the NHL playoffs and wearing the jersey gives him something to lift his spirits, and a sense of normalcy.

“Even though there’s a lot of chaos and a lot of crazy stuff going on here, being able to in this day and age listen to at least a game and cheer for a home team is something pretty special,” Rock said.

“The point is that the jersey brings some smiles, because it lets people forget that you’re wearing armour underneath it.”

Russia invaded Ukraine on Feb. 24 in the biggest attack on a European country since the Second World War, causing millions of people to flee their homes. Since then, some cities have been largely reduced to rubble, and thousands of civilians have died.

“There’s a lot of important things happening here and there’s a lot of need that’s here. And if everybody can do what they can to support Ukraine — Ukrainians and all the work that’s being done here — that’s really the best thing.”

pandemic has brought mental health issues "to the forefront" 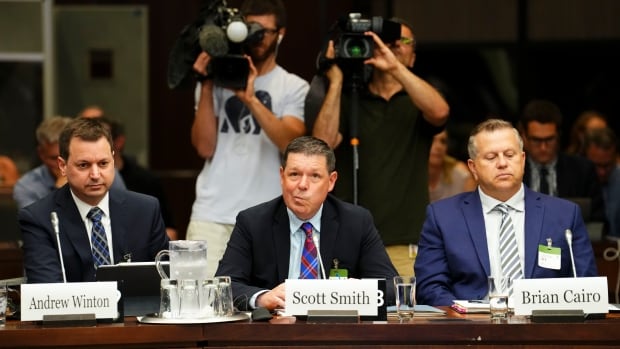