Israel Mianscum, a young Cree hockey prospect from the community of Mistissini, Que., had been invited to a development camp with the Montreal Canadiens hockey team.

“The whole Cree Nation is rooting for him … you see that through social media,” said Israel’s father, Louie Mianscum, adding the invite came less than an hour after the NHL entry draft wrapped up in Montreal on Friday afternoon.

“He was always crazy about the Montreal Canadiens. That was one of his dreams to actually play for them,” said mom Tiffany Neeposh Mianscum, who up until the call came, was a committed Pittsburgh Penguins fan.

He was always crazy about the Montreal Canadiens.– Tiffany Neeposh Mianscum, Israel’s mom

Israel got the call while he was in Gatineau playing in a hockey tournament. Someone reached out to his parents, who were in the stands, to make sure the 19-year-old answered his phone.

“It was very special,” said Tiffany. “Just seeing his facial expression. He had a big smile on his face … a smile I haven’t seen in a while.”

This summer Israel has been training in Châteauguay, on break from his team, the Sherbrooke Phoenix in the Quebec Major Junior Hockey League (QMJHL).

Now, his parents, uncles and a few cousins and other family members are at the Bell Sports Complex in Brossard watching the development camp action on the ice.

“I told him to play his very best and that we are already super proud of him,” said Tiffany.

“And I told him I loved him and that we support him 110 percent.”

On the drive between Gatineau and Brossard, Israel and his dad talked about his hockey journey and his goals.

“[I told him] The invitation is just the start. Your hard work … you have to show them now. The chance is there,” said father Louie.

[I told him] … you have to show them now. The chance is there.– Louie Mianscum, Israel’s father

A total of 40 players are participating in the Canadiens development camp happening until July 13 at the Brossard rink, according to a news release by the organization. They include players recently drafted, like Juraj Slafkovsky and Filip Mesar.

Israel did not skate with the rest of the development camp on Monday, because of a hamstring injury, but the hope is he will get a chance on Tuesday morning.

The Canadiens have also invited guest coach and director of the Cree Nation Bears hockey program, Charly Washipabano, to its development camp as a coach. Washipabano is also the program co-ordinator of the Eeyou Istchee Sports and Recreation Association. He will accompany the Canadiens coaches on the ice during the sessions.

“It’s huge indeed, and something I obviously don’t take for granted. Couldn’t feel luckier, and humbled by such an opportunity,” wrote Washipabano on social media, adding that what Israel has accomplished by receiving his invite is “huge for all of us in the Cree Nation.”

Raymond Shanoush is the president of the Eeyou Istchee Sports and Recreation Association.

“It means a lot [for Israel],” said Shanoush. “They will get to see him perform … see his endurance … and his potential.”

As hockey player with professional potential from the North, Israel has had to deal with the isolation of moving away from home at a young age to pursue his hockey dreams.

In his case, it meant leaving home at the age of 11 and moving to another Cree community of Oujé-Bougoumou.

“It’s a lonely road for him,” said dad Louie.

Sights set on the NHL

On top of the isolation, Israel and his family have also struggled with the high costs associated with playing hockey at this level. In the lead-up to getting the invitation to join the Canadiens development camp, the 19-year-old was without a place to stay and was sleeping on a relative’s couch.

“We know he’s prepared for it. He only took a week off after the season. He’s been doing that for the last three summers. He’s really focused on trying to make it to the NHL,” said dad Louie, thanking family and the whole Cree Nation for the support received so far.

“My whole family are Habs fans,” she said. “I was a Pittsburgh fan for a long time. [I told Israel] the only time I’m going to change my team is if you play for the Montreal Canadiens.” 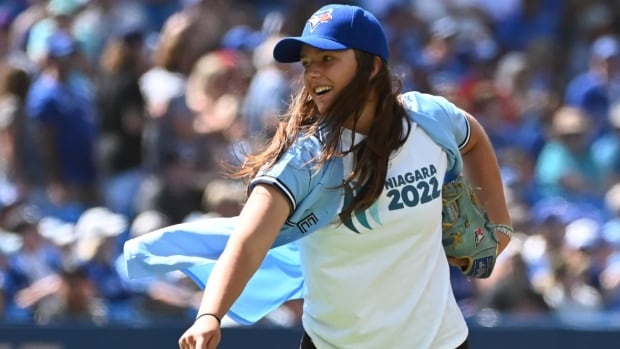