A landspout tornado appeared to touch down in south central Saskatchewan Tuesday night.

While not confirmed by Environment and Climate Change Canada as of 9 p.m. CST, the tornado was spotted by Rob Been near the village of Keeler—about 45 kilometres northwest of Moose Jaw—around 7 p.m. CST.

Been told CBC News he was taking a post-supper nap when he was awakened by loud thunder. The next thing he knew, a tornado appeared to be forming.

There were several eyewitness accounts of an unconfirmed tornado in the Moose Jaw, Sask. area on Tuesday evening.

“You’re awestruck at just the sheer power and the volatility of it,” said Been.

“The winds came up so quick, the hail came down in a hurry. That thing formed almost out of nowhere.”

Eric Dykes, a meteorologist with Environment and Climate Change Canada, said the intensity of this storm was unexpected.

“There were no supercell tornadoes in the area at that moment. Radar didn’t indicate too much at the time storms were expected, but severe storms were not expected to that degree last night.”

Been said he isn’t aware of any damage close to his property at this time. He still can’t believe how close he was to the storm.
“Being a truck driver, I’ve seen tornadoes off the in distance before but never this close,” he said. “Kind of as close as I’d like to get, honestly.”

Dayle Bueckert also found herself surprisingly close to the storm.

The Saskatchewan farmer was driving with her kids north along Highway 2 from Moose Jaw when she spotted the apparent landspout tornado.

“It formed right in front of me and I was like, ‘whoa, this is crazy,'” she said. “I wasn’t going to stay in the storm so I continued driving … I only got mostly rain and hail.”

Bueckert said hail varying between pea to nickle size fell at their home near Eyebrow.

As for damage, Bueckert and her husband are planning to assess their recently-seeded canola farm near Keeler Wednesday morning.

“We did get one report that was called in to us, a gentleman said that he did see it. And he believes that he saw it on the ground for about 15 minutes.”

Dykes says they will be looking for more eye-witness reports of the possible tornado before they classify it. He encourages people to come forward with their photos and videos. He says so far there have been no reports of injuries or fatalities associated with this weather event.

If confirmed, Tuesday’s landspout tornado could be the first reported in Saskatchewan in 2022. 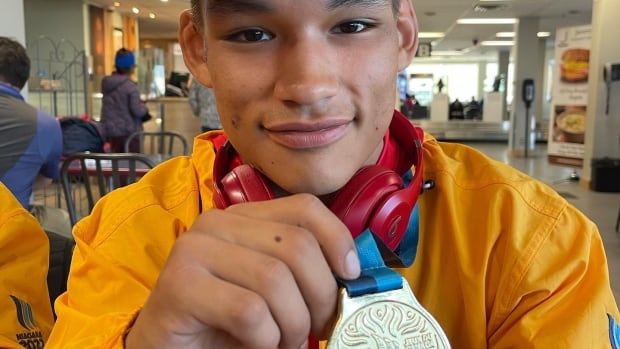 ‘Happy to be home,’ says Nunavut wrestler who arrives to a celebration | CBC News